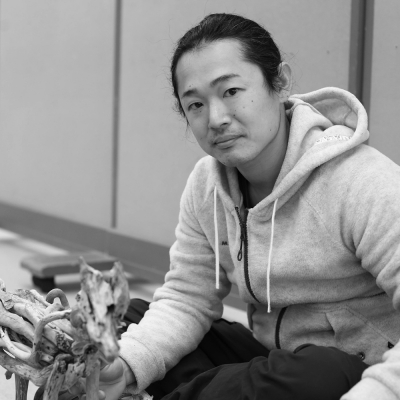 Born in Wakayama Prefecture in 1985. Sculptor based in Ishinomaki city. Completed the Design Research at Tokyo Zokei University Graduate School in 2011. He started an open studio with his university classmates in Hachioji, Tokyo called “pimp studio” (he was a member until 2016). He showed his works mainly in Tokyo and held his solo exhibition “Atsushi Tomatsu solo exhibition” at Art Lab Tokyo. He participated in Art Fair Tokyo booth at Art Lab Tokyo in 2013 and 2014, and worked on expressions of wooden sculptures in the motif of human body exploring the theme of possibilities of human body sculpture in contemporary times. In 2016, he moved his base from Tokyo to Oshika Peninsula in Ishinomaki city, expanding his theme to a beach where there is a studio and artworks. After presenting his 3D work series Oshika ni sumau mono (those living in Oshika) using driftwoods in Reborn-Art Festival 2017, he installed them at Momoura and Ayukawahama, Oshika Peninsula. In 2019, he became a representative of Kiwamari-so in Ishinomaki and GALVANIZE gallery that artist Kaoru Arima founded.
Central Ishinomaki
ARTIST LIST