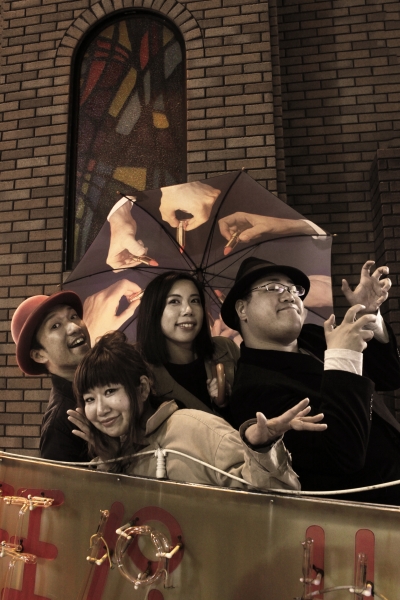 In Ishinomaki City, Miyagi, groups of people who had been organizing, creating, and producing cinematic and theatrical events, such as Ishinomaki Friday Cinema and the Ishinomaki Theater Festival, assembled in December 2018 and formed this council. Various projects comprehensively address Ishinomaki’s theatrical culture, including Mushroom, which presents screenings of interesting films, some with meals included; Piglet, which stages new plays; Socrates, which conducts workshops and training programs related to the theatrical culture of Ishinomaki; and Toshiko, which holds discussion groups on film and theater. The goal is to relate the theatrical arts to everyday life from various perspectives, and to continue implementing these projects with a priority on fun for all.
In February 2019, the council co-organized “R,” a multidisciplinary event incorporating music, tanka poetry, and theater, at the former Kankeimaru Shoten store in Ishinomaki City. A talk event accompanied by a meal was held at the screening of the film Eclair: Okashi Horoki (Éclair: Pastry Wanderings) the same month. The current members are Abe, Yaguchi, Sano and Kikuchi.
Central Ishinomaki
ARTIST LIST