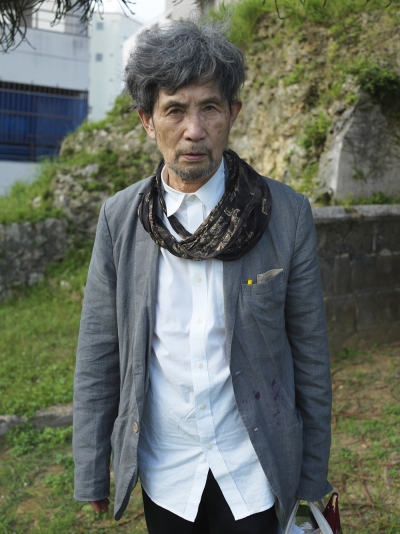 Poet. Born in 1939 in Tokyo, Japan. Gozo Yoshimasu graduated from the Department of Literary Studies at Keio University in 1945. Owing to the poetry magazine Drumcan to which he contributed while at university, he entered the world of poetry in the 1960s as a standard-bearer for poetry, projecting an image of rushing linguistic impulses on the verge of explosion. Since the publication of his debut poetry collection Departure in 1964, he has traveled to various regions of Japan and the world over half a century, shifting to the phase of incoporating the spirits of different lands and voices of others into his poetic space while continuing to create groundbreaking work at the forefront of contemporary poetry. His published poetry collections include Anthology of Golden Age Poetry; River Written in Cursive; Osiris, God of Stone; Helix Songs, and Kemono kun (little monster). In addition, he has written numerous works of literary criticism including I Am a Flaming Mirage and A Lifetime’s Path through Dreams: Walking with Orikuchi Shinobu, and is a pioneer of poetry recital performances in Japan and abroad. In recent years, Yoshimasu has broken new ground in works that sharpen the visual, auditory and other senses, such as omote-gami (Mainichi Art Award) that combines his own poetry with multi- exposure photos, video works known as gozo-ciné that function as documents of poems, and objects that involve letter engraving onto copper plate. In 2015, he was recognized as a Person of Cultural Merit, and was awarded the Imperial Prize and Japan Art Academy Prize. Yoshimasu is a member of the Japan Art Academy. His exhibitions include “The Voice Between: The Art and Poetry of Yoshimasu Gozo” held at The National Museum of Modern Art, Tokyo in 2016 and “The Echoes from the Abyss: The Poems of Gozo Yoshimasu” held respectively at Ashikaga Museum of Art, Okinawa Prefectural Museum & Art Museum, and the Shoto Museum of Art between 2017 and 2018.
Ayukawa
ARTIST LIST