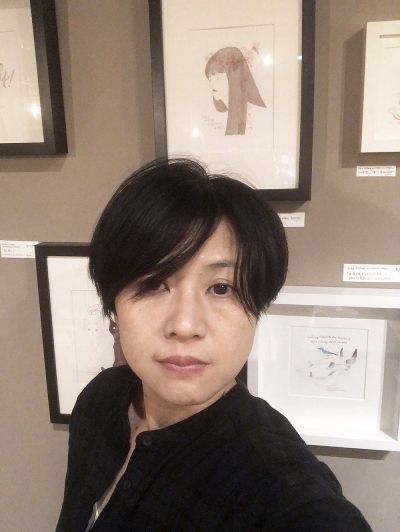 Illustrator, owner of M.O.N.O. SHOP & GALLERY. Born in Aichi Prefecture in 1970. Based in Kanagawa Prefecture. Graduated from Nagoya Zokei Junior College of Art & Design with a major in Inter-media. (A junior college was closed in 2011 and is now renewed as Nagoya Zokei University of Art & Design.) While working as a research laboratory staff at the same university, she studied contemporary art including installations, but later became a freelance illustrator after various sequences of events. She mainly works on advertisements such as flyers for theater performance, illustrations in books and magazines as well as book cover design. After holding a joint exhibition of illustrations “reply” at Libest Gallery So in Kichijoji, Tokyo with manga artist Hisashi Eguchi in 2010, she planned group exhibitions with various creators including manga artists, illustrators and designers. She opened M.O.N.O. SHOP & GALLERY in 2017, which has been her own studio, gallery and shop. In this time, She directs the exhibition of Toshinao Aoki.
Central Ishinomaki
ARTIST LIST