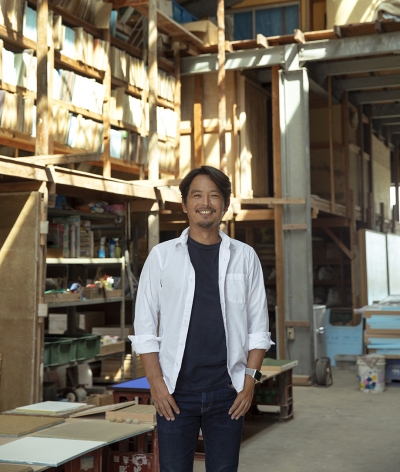 Naoki Kusumi, born in Awaji Island of Japan in 1972, is the third generation of a traditional plaster artisan family. He started learning the art of plastering from at the age of three. When he was 18, his father took him to Europe to “observe the world.” During his “Grand Tour”, he was most impressed by the massive architecture of Antonio Gaudi, and decided to master the art of plastering. After returning to Japan, he apprenticed with various master plaster craftsmen until establishing his own company in 1995, at the age of 23. His works are very unique as they combine both traditional Japanese plaster techniques and his own original and creative styles.In addition to his work in Japan, he has overseas experiences, particularly in Germany and France, and recently in Singapore. Naoki’s experiences in both Japan and overseas add to his unique style. As a master of an ancient, traditional art form, he has been involved with various restoration projects “Juuyo bunkazai”, or “kokuhou”- important Japanese cultural properties and national treasure, such as traditional Japanese teahouses and Kinkakuji (Golden Pavillion in Kyoto). His capacity as an artist extends beyond traditional works, with many of his projects involving interior and exterior coverings of commercial, educational, and residential buildings. There are documentary films of him in Japanese TV such as NHK and others. He also appears on text book of Japanese Junior Hight school. He also designed an artwork commemorating the 60th anniversary of Japan becoming the member of the United Nations. Naoki cherishes, and is inspired by, the unique characteristics and culture of individual locations and clients. He is involved from the early design phases of each project, giving his expert advise on how to incorporate, or create harmony with, the existing local culture or nature surrounding the projects. His traditional plastering techniques and unique ideas are highly regarded all over the world. For this coming fall, he is scheduled to have his own exhibitions in Tokyo and Kyoto.
Momonoura
ARTIST LIST