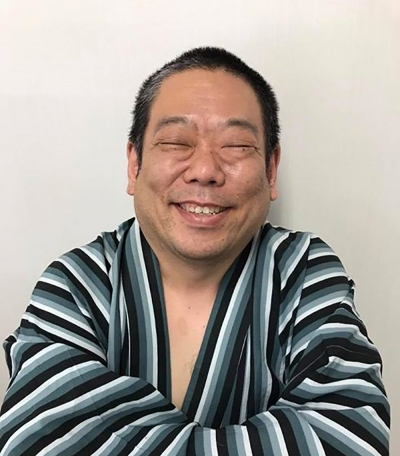 Born in Tokushima in 1965. He has gone by the name “Parco” since 1989, when he was teaching elementary school, and won the Parco Award in “the Nippon Graphics Exhibition”. In the 1990s, after working as a junior high and high school art teacher, he changed careers and became an illustrator, then made his manga debut in the publication Garo. Kinoshita is also nicknamed Koen-no Kinoshita (lit. “under the tree in the park”) because he frequently holds workshops and performances for children, primarily in public plazas. He became active overseas after joining the contemporary art group The Group 1965, and has shown work in many exhibitions in Asia and Europe, as well as unilaterally participating in international exhibitions by staging guerilla performances alone. After being mistaken for Sendai Shiro, a semi-legendary local historical figure, when he participated in the “Tourism and Art” Exhibition held in a shopping arcade in Sendai City in 2004, he has often disguised himself as Sendai Shiro when carrying out activities in Miyagi Prefecture. After the Great East Japan Earthquake of 2011, he dedicated himself to community building through the power of art in disaster-affected areas and temporary housing complexes, and remains involved in reconstruction support activities today. In 2017, he moved to Miyagi Prefecture on the occasion of the Reborn- Art Festival, a festival of contemporary art in Ishinomaki City. Kinoshita’s specialty is painting, but he also started producing wood carvings, based on the Oshika Peninsula. He also launched art-related support activities in Banda Aceh, the area most severely affected by the 2004 Indian Ocean earthquake and tsunami.
Momonoura
ARTIST LIST