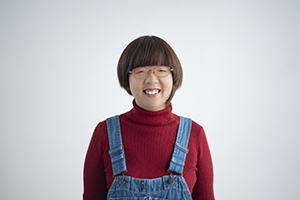 Tomoko Hisamatsu was born in 1991 in Mie, Japan, works and lives in Yamagata, Japan. In 2017, she graduated from Tohoku University of Art and Design with a Master’s degree in Japanese painting (Nihon-ga) and left the university without finishing her doctorate program in 2019. Her paintings started by doubting the modern art system and historical perspective in Japan. In recent years, she has been working on photo paintings taken by smart phones, and the theme is “Painting of Little Narratives”. She was an invited artist in a residence program “ARKO 2018” by Ohara Museum of Art, and also showed a solo exhibition in 2018. The Burial of Japanese Art (2014) was received the Incentive Prize from The 7th Koji Kinutani Prize, and Represent Japanese Art (2014-2015) received Toshiko Okamoto Award (2nd Prize) from The 18th Taro Okamoto Award for Contemporary Art in 2015. Besides paintings, she collaborates with other people to search how to announce and produce art work uninfluenced by the art industry’s existing system. She participates in artists movement such as Yamagata Geijutsu Kaiwai and New Kitakata Art Club (a private art lovers group).
Central Ishinomaki
ARTIST LIST