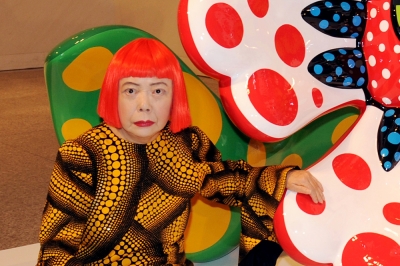 Born in Matsumoto, Nagano, in 1929, Yayoi Kusama is an avant-garde artist. She started to create paintings with nets and polka dots as motifs drawing from her experiences of visual and auditory hallucinations since early childhood. Overcoming various obsessions, she discovered salvation through self-obliteration by compulsively repeating patterns in the creation of artworks. In 1957, Kusama left Japan for the US, where she developed various artistic forms at a higher level of abstraction, including series of net paintings, soft sculptures, mirror room installations and happenings; and through which practices established herself as an avant-garde artist. Since then, she held exhibitions all over the world. Particularly, the retrospective exhibitions in recent years have been viral, such as in Tate Modern and Centre Pompidou. Kusama’s exhibition tour around Asia and Latin America made new records on the visitor attendance of museums in 2014. From 2017, her exhibition tour which started from Hirshhorn Museum and Sculpture Garden is on its way across North America. She was granted the Order of Culture by the Emperor of Japan in 2016.
Momonoura
ARTIST LIST