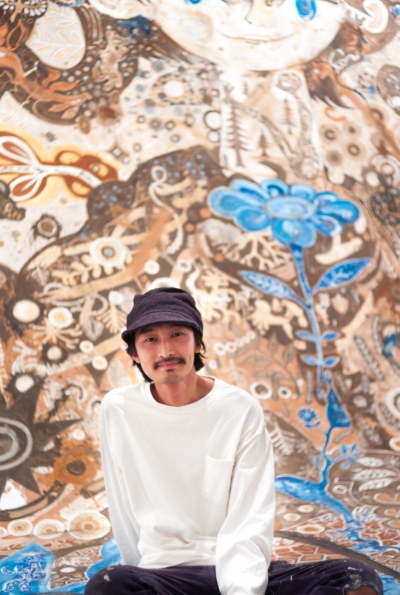 Born in Tokyo in 1981. Lives and works in Tokyo. In addition to producing works in his own studio, since 2003 Asai has been creating them at sites with widely varying conditions, including “Masking Plant” (plant made by drawing on masking tape with water-based markers and applying it to surfaces) as well as “Earth paintings,” made with mixtures of water and soil extracted from various sites where he has done residencies, and the “Sprouted Plants” series in which he cuts out the shapes of animals and plants from sheets of white material for marking lines on roads, and burns them onto road surfaces with a blowtorch. In recent years, he has drawn attention with prolific production of large-scale murals easily exceeding 30 meters in length. Asai’s animals and plants are often densely packed and juxtaposed on the picture, with small animals appearing to nest in large ones, representing a universal ecosystem in which macrocosm reflects microcosm. Recent major solo exhibitions include “Yusuke Asai: Seeds of Imagination, Journey of Soil” (The Hakone Open-Air Museum, 2015-2016), and he has participated in numerous art projects in Japan and overseas such as “All Living Things” (Vangi Sculpture Garden Museum, 2016), the Setouchi Triennale (Inujima, 2013-2016,), Echigo-Tsumari Art Field 2015, and “yamatane” (solo show, Rice University Art Gallery, Houston, 2014).
Kozumi
ARTIST LIST