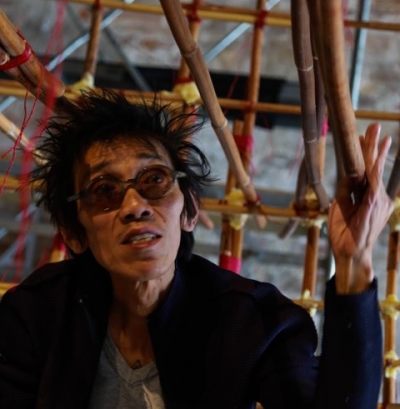 Born in 1964 in Singapore. He lives and works in Singapore. Having worked with an array of sculpture, installation, painting and drawing, experimental sound and music, video, film, performance art, dance and theatre for more than two decades, Kuning resists convenient categorical claims to his art- making. Multi-disciplinary and improvisational art practice has always been important to him. Today he is considered one of the most versatile artists working in the region, and is at the forefront of avant-garde practice in Singapore. Upon graduation in 1989 from LASALLE College of the Arts with a major in ceramic sculpture, Kuning was selected as the direct disciple of Sultan Alisjahbana (Bali) to study literature and rituals. Thereafter, he lived in The Artist Village (TAV), an artist colony founded by Tang Da Wu, and was nominated the first president of TAV. It was during this time that Kuning extensively explored the arena of performance art, under the guidance of Tang. Connected closely with his interest in the body, Kuning's visual artwork was focused on the "tortured body". He explored the possibilities between sculpture, sound, and performance, often creating wax objects. In 1996, his work The Body was selected to be part of "The 2nd Asia Pacific Triennial of Contemporary Art" in Brisbane, and the following year his work was shown at the Art Gallery of New South Wales alongside European masters such as Francis Bacon and Egon Shiele as part of a large exhibition entitled “BODY”. Quickly, Kuning's interest moved towards physical movement and language related to Southeast Asian rituals. After departing from TAV, he formed Metabolic Theatre Laboratory (MTL), a research- oriented dance theatre company, during a residency at The Substation. Many memorable productions of MTL toured Hong Kong and Korea in 2000. During this time, he also performed throughout Singapore and Japan, collaborating with artists such as bassist and composer Tetsu Saitoh and the late dancer Motofuji Akiko. After MTL disbanded in 2001, Kuning pursued his own work as a soloist, focusing on drawings, music and research on Melayu history and the Orang Laut, "sea gypsies" who are indigenous to the Riau Archipelago.
Ishinomaki Station
ARTIST LIST